It took me two years, but I finally made it to the destination usually at the top of the list for Melbourne tourists.

I didn't want to take a standard day trip coach bus tour, I wanted a bit more freedom and adventure. So Adam arranged the car and a place to sleep in Apollo Bay so we could take advantage of the lingering days of summer over two days. We started our day at Prahran Market for our favorite weekend treat: fresh grilled mushroom burgers (no meat) on sourdough rolls with onions, Parmesan, and chipotle mayo. They are served outside Market Lane coffee, where my current favorite is the Juan Ticona pour over served in beautiful blue hand made cups. 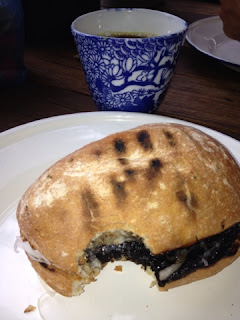 The morning was promising in Melbourne, but Victoria weather had other plans for us, so we prepared for a rainy, cool weekend along one of the most dangerous shipping lanes in the world: Bass Strait. We thought we were prepared, but on our first stop at Bells Beach, the ocean caught us off guard and we wandered with wet shoes and socks back to the car. The torrential rain started about 100 meters from the car and we just avoided being soaked through. Lesson learned: don't turn your back on the ocean and there is a reason Aussies always wear thongs (flip flops). Thankfully our socks dried quickly in the back window of the car. 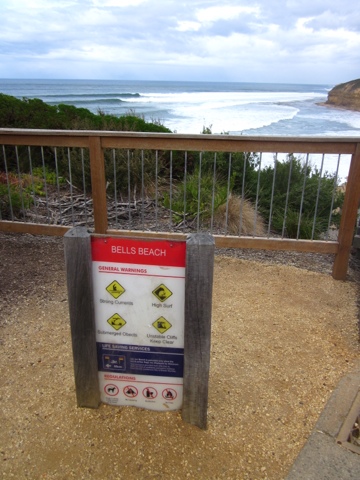 Bell's Beach is a surfer's paradise (high surf) and it was busy with surfers and people prepping for an upcoming RipCurl Surf Competition. The sign warns of Strong Currents, High Surf, Submerged Objects (from wrecks), and Unstable Cliffs. We watched a few surfers catch waves in and made a temporary friend when a beagle decided to follow us. He was friendly until we played fetch and he got a bit territorial over his new found stick. We hope he found his master eventually. We continued on our way, Adam driving so I could gaze out on the left at the coastal views. In the misty rain it reminded me of growing up on the North Pacific Coast in California, like driving on Route 1 near Ft Bragg. But the terrain was different in key ways. The rocks were new to me, the surf was rougher, the foliage was denser. We were lucky to spend some time on the Great Ocean Walk as well as in the car, and all the plants seemed strange and exotic. 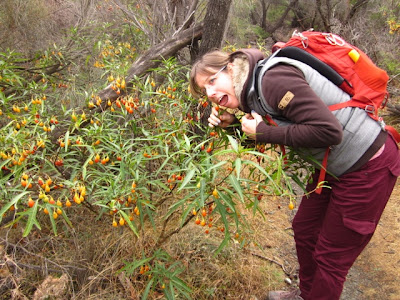 We tried to catch the sunset, but we underestimated the time to get to a good lookout point. We were hoping to view it from the 12 Apostles, but we were literally laughed at by the woman at the Apollo Bay visitors center when we asked if we would make it. She directed us to the Cape Otway lightstation instead.

On the way to Cape Otway, we took a quick stop in the dense rainforest in the hills just above the cape. This is where the carnivorous black snail lives and the trees are lush and moss covered. It rained on us, as can be expected in the rain forest. So we ran from giant frond to giant frond seeking some cover, ultimately just getting a bit wet. The trail was well maintained and we managed not to slip and fall, even though Adam was wearing flip flops. There were no snail attacks, but we did find a dead one on the path, so clearly we were lucky. 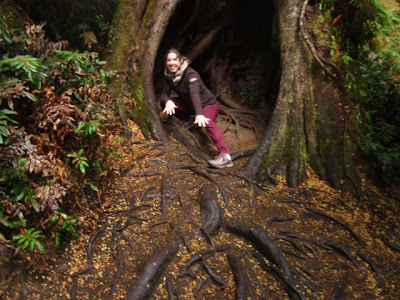 Turns out, Cape Otway lightstation closes at 5 and we arrived at 6. But we figured we'd find a good view from the Great Ocean Walk leading off to the West. 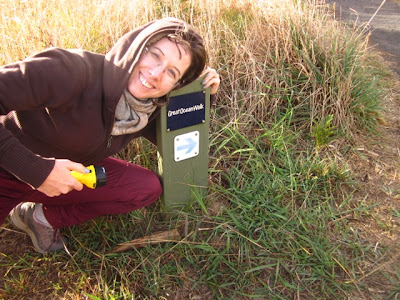 Instead, we found ourselves in dense foliage with occasional rain showers and the feeling that just around each corner we'd see ocean and sky. We reached the Cape Otway cemetery and realized that if we hung around for sunset, we'd be wandering past the cemetery at night, and we'd been watching too many zombie shows to feel ok about that. So, no sunset views, but we saw a field full of kangaroos and a mom and joey bounding across a field cleared for grazing cattle. At one stage we turned a bend in the road and saw 4 large cows calmly standing on the "shoulder". We were glad they hadn't decided to take a leisurely stroll across the road. The smell of Eucalypts in the rain was lovely. We got back on the road at dusk, the most dangerous time to drive in an area populated with wild kangaroos. On one stretch, we had a near miss as we cruised passed a full grown brown kangaroo calmly lingering in the other lane. We hoped he cleared out after us so no one hit him from the other direction. They can be especially dangerous because they jump up and go through the windshield. I slowed to about 40kph after that for a strained drive the rest of the way to Apollo Bay. 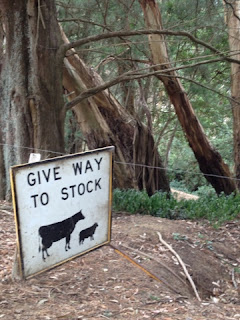 We stayed the night in Apollo Bay at the Sandpiper Motel. It was the perfect spot to rest our heads before a long drive the next day. We broke our fast at Nautigals Cafe, run by women and nautically themed, and set out for Wreck Beach, the 12 Apostles and Loch Ard.

Wreck Beach is a tricky place to get to, which is why it is the perfect stop for the adventurous. No coach tour busses or campers can make the journey. All the vehicles we met were 4WD, but we motored on in our little Hyundai. The road is not paved, and not really 2 lanes, a bit better than a logging road, but only because there are some houses on Moonlight Head Rd. At one point we had to stop as a Kangaroo came bounding straight at us, with a car behind it blocking its path. Just before colliding with us it veered right and into the brush. Quite nimble, those roos!

The guide book told us it was a 90 minute hike and strenuous, and that was spot on. We saw only two people and their dog as we wandered the beach and came across a few anchors left by big wrecks from an era long gone. The rock formations are alien and the tide threatens to eat the beach you are standing on. We were lucky the tide was out enough to see what we came for. GOW stands for Great Ocean Walk. 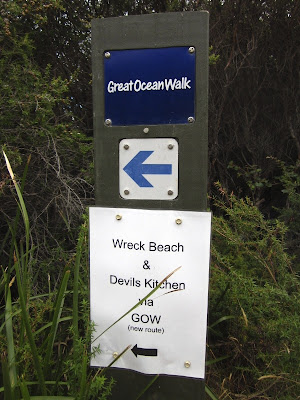 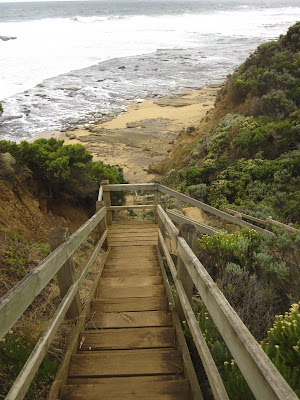 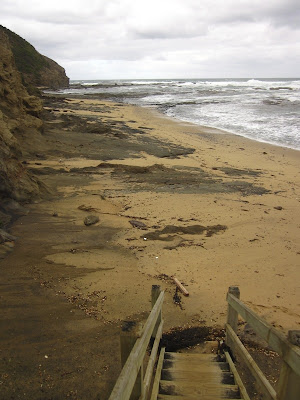 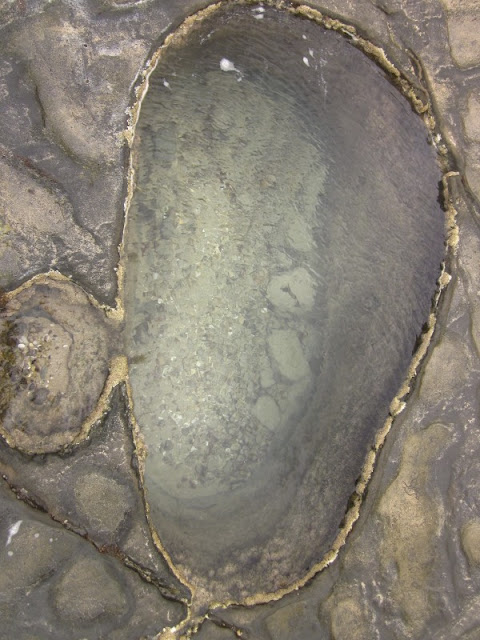 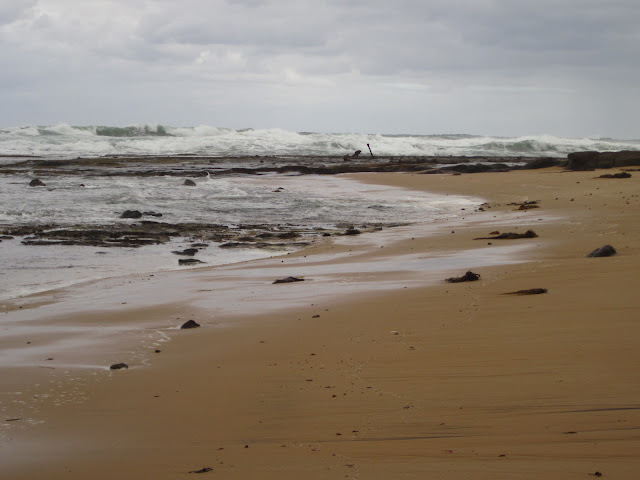 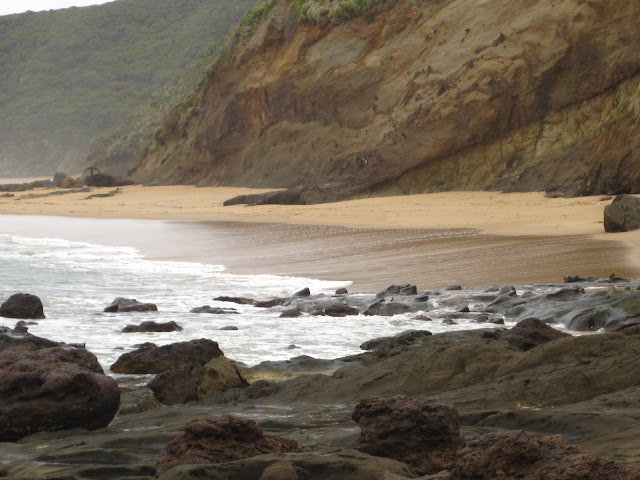 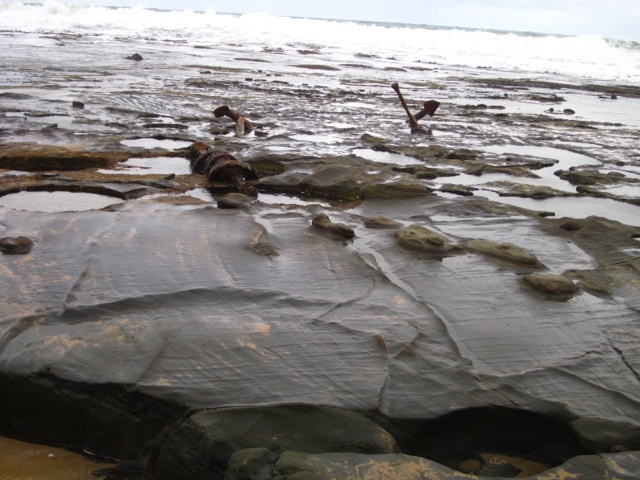 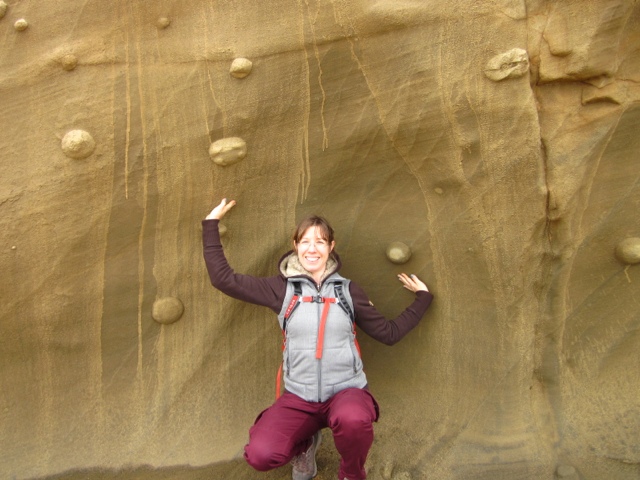 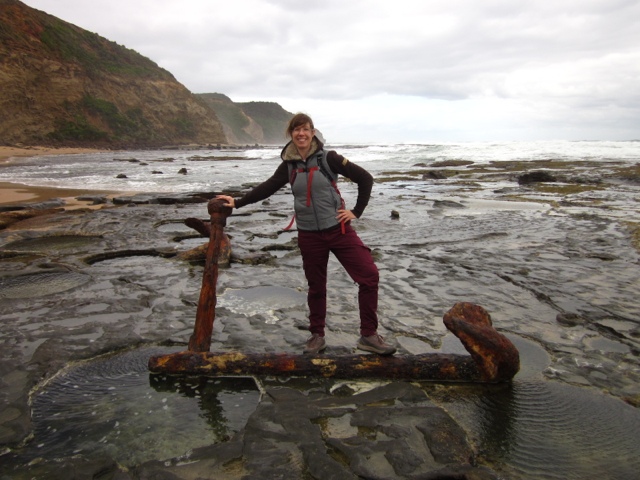 We took the advice from the guidebook and kept an eye on the ocean at all times. We got a bit wet, but kept a safe distance. After the trek up the hill we were ready to visit the renowned 12 Apostles. Unlike Wreck Beach, 12 Apostles is meant for mass tourism. Big parking lot and wide walkways, all flat and accessible. The wind whipped and the waves rolled in around large stone pillars standing against the ever pounding ocean. While impressive they had remained, it was clear they too would succumb and the land we stood on would also eventually crumble against the never relenting tide. 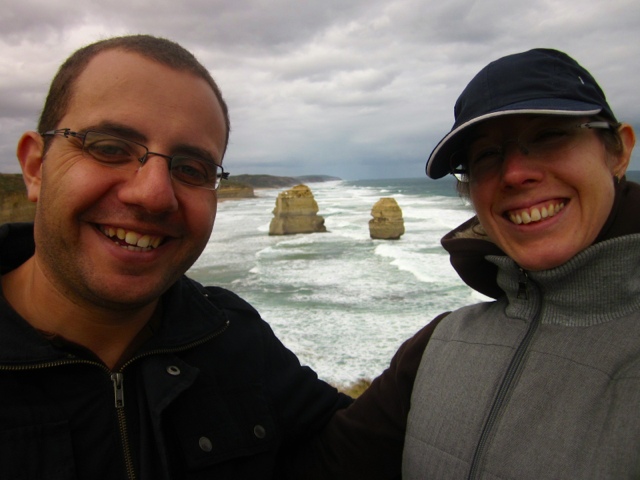 The photos don't do the waves justice. The water was the blue of arctic waters, colored by the sand it tore off the beach, white with the froth of the waves. I only counted 9 Apostles, but I guess that is why the helicopter tours are popular, probably get to see all of them from a bird's eye view. 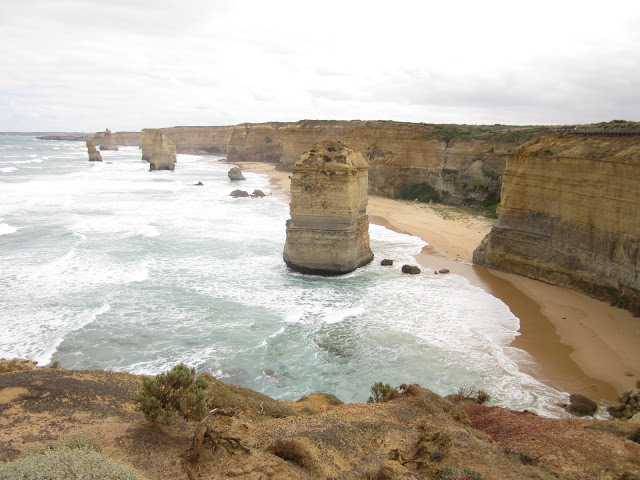 We stopped at Loch Ard just down the road from the 12 Apostles and found the perfect enclosed beach where you can watch the waves from ground level pummeling the rocks and beach. 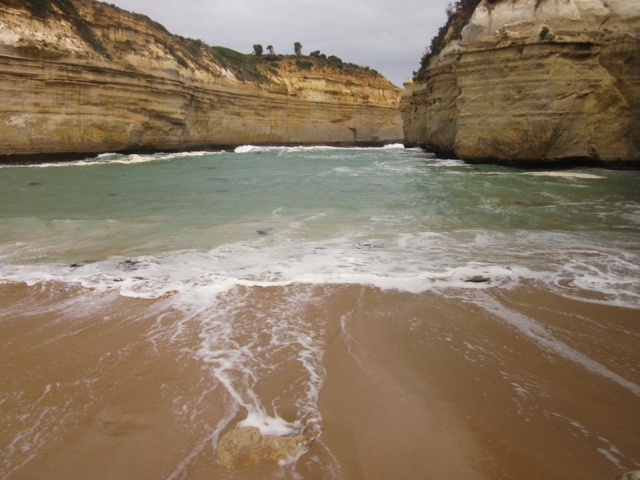 Looking back at the cliffs showed the impact of the salt and the sea. I got one jump shot in before we got in the car for our journey home. 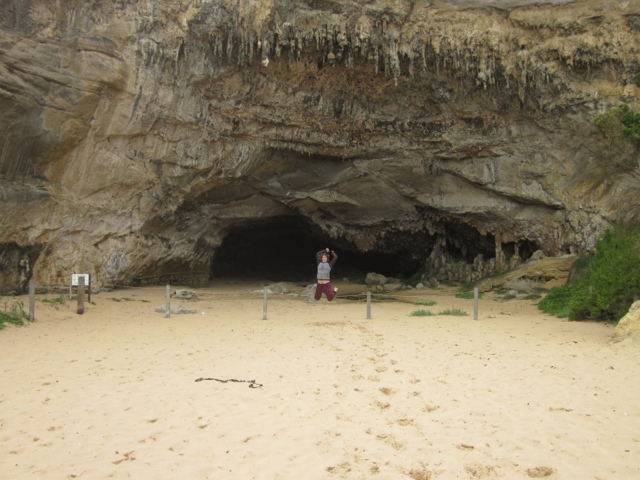 I finally ticked this one off my bucket list, in the style I wanted. I do hope to return for some more wild ocean time. Maybe next time we will drive all the way to Adelaide!