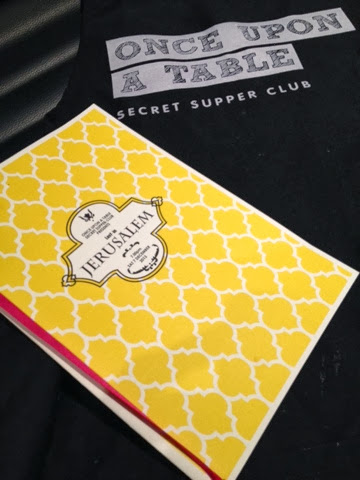 Many months ago I got it in my head that we should be part of an underground supper club.

Maybe I had eaten too much fried chicken, or simply gotten a foodie high from all the collaborative dinners with friends. Whatever the reason, when I found a little article about Once Upon A Table, I wanted in.

We missed the first event in Melbourne but signed up to hear about the second one. So when the call went out for a new venue, I messaged Adam from Japan and said "we have to do this!". I had no idea what I was getting us into. Always the best way to start an adventure!

Adam took the lead while I finished my APAC travels and much was done by the time I met all the girls. Led by Angie Ma and Vittoria Chiarilli, the team consisted of a lovely bunch of talented and energetic women: Bridget, Aurora and Sophie - along with their amazing families who pitched in along the way - especially Vitti's young daughters.

The planning and imagination involved was clearly more than I anticipated. Bridget and Aurora planned the scene, Angie and Vitti concocted the menu - all based on a middle eastern theme. The title was "Lost in Jerusalem". This resonated with Adam especially as his father was born there.

Adam contributed three dishes: Shush Barack (lamb dumplings in yogurt sauce), Mjaddara (Rice and Lentils) and Hummos (which I made to his recipe). I helped prepare the Fattoush (lovely dressing of lemon juice, pomegranate, olive oil, sumac, salt) and the sweet potato latkes. 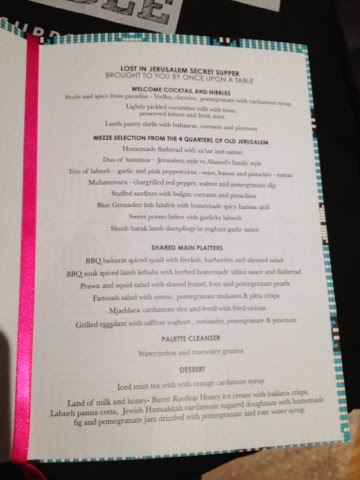 The menu was a smorgasbord, which is the whole point. Vitti and Angie and the team put their hearts and souls into everything. Labne from scratch, fresh flatbread with Za'tar, grilled eggplants, and the sardines were a surprise favorite of mine.

The meal was paired with wines kindly donated by the Tasting Table and each came with a story - half from Isreal/Lebanon, half from Australia. The Chateau Musar was truly unique! There were local beers thanks to Kwencher, which I didn't try. The produce was thanks to Pino's Fine Produce and was fresh and beautiful. 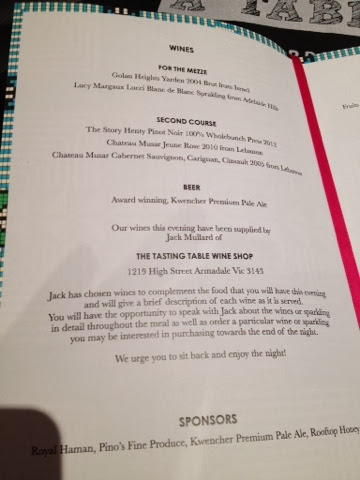 For me the biggest surprise was the effort put into the decorations. I had no idea that our home would be transformed into another world. You can see some of the professional shots on facebook. 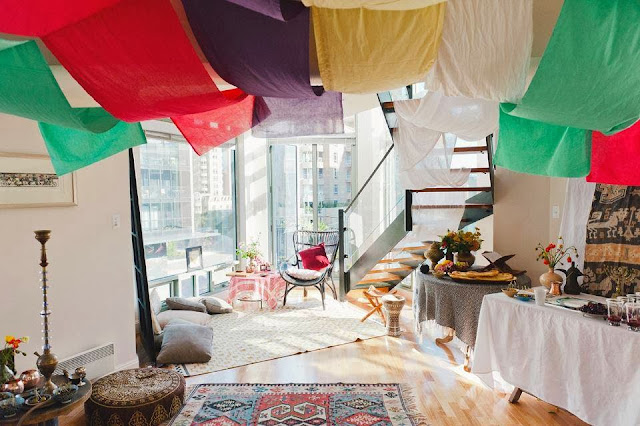 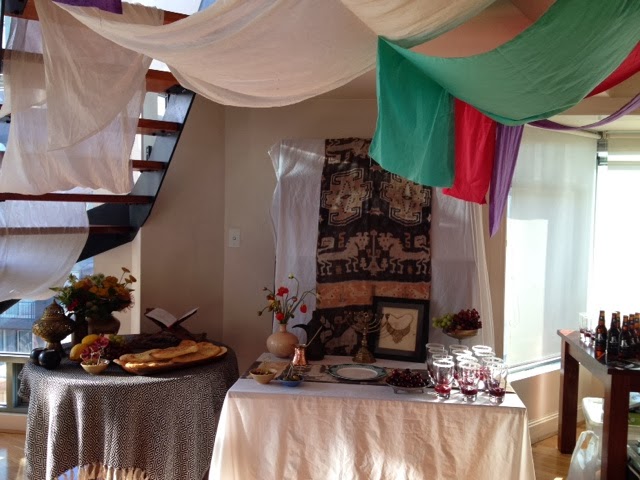 Inside the fabric draped from the ceiling under the direction of Bridget; six months  pregnant and standing on the back of my couch to hang fishing wire, I was impressed. Rugs covered the floor and cousins and poofs created an exotic ambiance. Sophie made muddled vodka/cherry cocktails with sugar laced rims. I served smoked trout wrapped in cucumber as the guests entered. 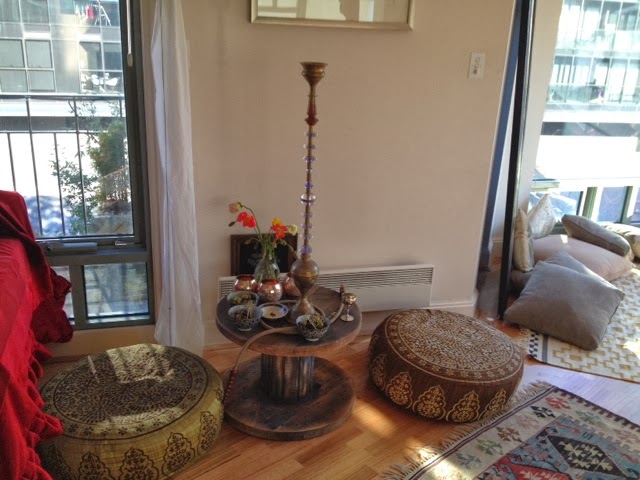 Outside on the rooftop terrace we were given the most gorgeous Melbourne day - the kind of legend since they happen so rarely. Clear blue skies, no wind, and the warmth lasted even after the sun set. We had heaters on standby but never needed them. The guests arrived at 7 and sat down to eat around 8:30. 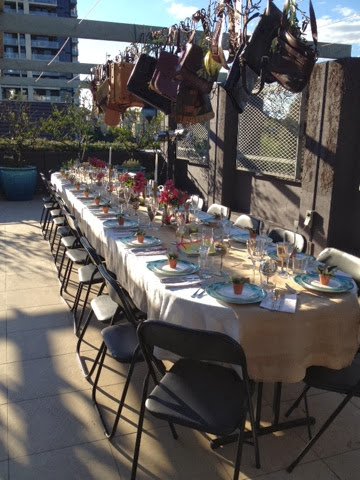 Aurora was the mastermind of the outdoor decorations, inspired by the souks (markets) with items hanging above the guests and lights and flowers brightening every spare space. 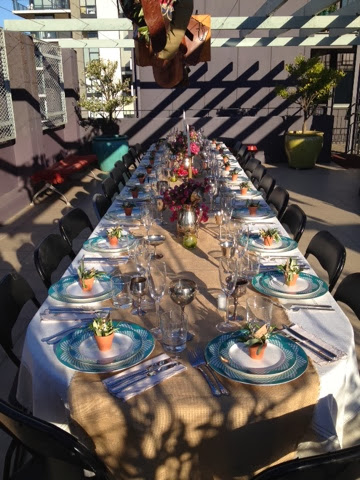 The plates were donated by Royal Haman - gorgeous tourquois with exotic patterns. Aurora's sister Sammie made the little placename pots with olive branches, rosemary and jasmine. The table sat 24, and I got to be one of the lucky guests.

Our day started at 9am when the tables and chairs were delivered. We worked all day and I got to sit around 9pm to join the guests, but the rest of the team worked the rest of the night. I felt a bit guilty, but enjoyed the company, ambiance, food and wine. Oh, and the weather, it was a magical night.

After all the wining and dining was complete the guests left happy with homemade baklava wrapped with a bow. And we got started with cleanup, at midnight. We had to crash a bit before 2am.

Our flat looked like a tornado from Arabian Nights hit it. But on Sunday the cleaning fairies came (Angie, Sophie and Vitti) and day by day we are putting it back together.

I have to admit, I kind of wish we could have kept the fabric up a bit longer. In the end it was more work than I knew and so much more fun. I feel lucky to have met these amazing women and to have a partner who was willing to go on this adventure with me. Next time - he gets to be the guest.
Posted by Jen Fein at 5:14 AM

Email ThisBlogThis!Share to TwitterShare to FacebookShare to Pinterest
Labels: Melbourne, once upon a table