This weekend those of us in the Southern Hemisphere gained an hour as we bid farewell to Daylight Savings Time and got a bit close to our Northern friends (hooray only 14 hour difference with NYC!).

We capitalized on this time based windfall by heading to Philip Island, a 3 hour drive with Friday traffic, that turned out to be more fun than just a parade of penguins.

Coincidentally, Tough Mudder made its Australian debut on the island's F1 race track. We wandered lazily by after lunch to gawk; the first mudder wave went out at 8AM for a 3 hour romp through 28 British Special Forces obstacles over 25km of track.

Our favorite obstacles were Everest and the Slip n' Slide + Mud Wall.


If you watch closely at the end of the clip in the back you can see the best team work in contrast to those who seem destined to wallow in the mud. The men removed their shirts and turned them into ropes to haul up their muddy mates.

Would you believe we actually walked away from this wanting to participate?! Everest was quite impressive not only because of the challenge, but because of the team work. We watched for a long time as the strong guys at the top helped waves of people make it over. We even watched a larger woman pump her fists in victory after her incredibly supportive team built a human ladder halfway up and four strangers pulled her the rest of the way. 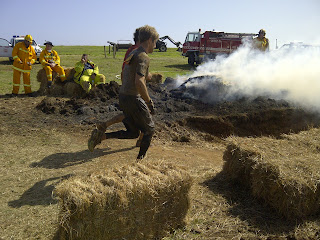 Check out the rotund fireman on the bale watching the Mudders run through the choking smoke and flame. I think I'd rather have a Mudder rescuing me from a fire.

We were so weary from our afternoon in the sun watching people overcome extreme physical challenges, that we treated ourselves to Fish n' Chips @ White Salt.

That night we gathered on the beach to participate in uber-touristy penguin parade gawking and I realized that the little penguins also have quite the challenging journey that can only be accomplished with the help of mates. They gather in clumps off shore and then float in after dark settles on the beach. They struggle to get their footing as the waves crash and the stragglers catch up. After a few false starts, finally a brave leader sets out and the troupe follows hurriedly across the open beach to the shelter of their burrows. Not an easy feat for a one foot tall, flightless bird that's more graceful in the water than on land. This is not my video, but I'm grateful to the tourists with better equipment who managed to document the nightly penguin adventure.

My second trip to Philip Island was certainly more fun than my first, mates really do make everything better.